Leeps and Bounds Above The Rest 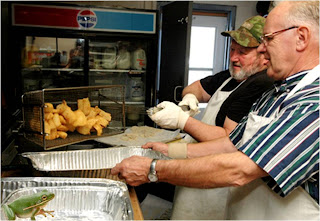 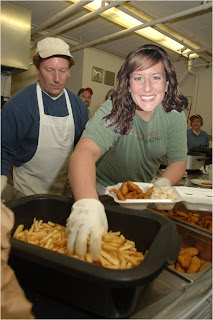 Some people might say cutting in line at a church fish fry is a sin, I say it’s a small price to pay in the name of journalistic integrity. When I arrived to Our Lady of Providence (OLP) to hear that frog legs were running low, I took the liberty of jumping to the front of the line with my friends, the Sedlak’s, who had been waiting for over 30 minutes. My guilt was quickly lifted when I received a heaping plate of deep fried shrimp and frog.

My excitement quickly fizzled after realizing that frog legs bare a striking resemblance to frog butt, and are connected by a center pelvic bone. The black veins running throughout didn’t help either. While they didn’t taste terrible, I’d only recommend them to a blind man.

Everything else on the menu was pretty top notch by fish fry standards. Crinkle fries were crispy, mac’n'cheese was creamy and both of my desserts were a sugary delight.

Only complaint - no beer. I was under the impression that alcohol was considered to be a cornerstone of the Catholic religion. Apparently this rule doesn’t hold up in Crestwood.