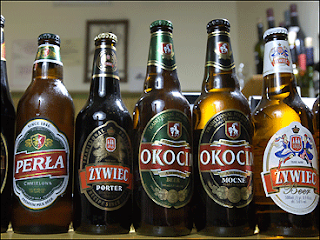 The verdict is in - the Poles know how to fry up a decent fish. The fry at St. Agatha's in Soulard was a festive kick off to the 2010 Lenten season. Atmosphere was great (kitschy, even by fish fry standards, but great), food was above average and the beer cooler was fully stocked with exotic malt liquors containing 8% alcohol.

Upon arrival, we expected to wait in line, but it would appear no one actually knows about this diamond in the ruff. In fact, soon after sitting down, a patron alerted the staff of our blog party and the parishioners brought over free homemade bread and Polish beer in appreciation for us bringing in, what turned out to be, about 50% of the revenue for the night. Note to any other frys we visit this season: free food and beer weigh heavily on my critique of your operation.

Aside from the bribery, the food was pretty decent by fish fry standards, and portions were more than generous. Fish seemed to be fresh, not frozen or straight from the Van de Kamp's box. The potato salad, fries and bread were especially tasty. And the dessert was good (as dessert usually is), despite only having one option available. The meal was a steal at $6 for dinner, dessert and tea/coffee.

My only recommendation would be to offer a couple different fish options. With fish frys becoming more progressive, diners are accustomed to a shrimp or fish taco here and there. Also, offer free water. Even if it's in an old pitcher from the church basement tap, we can't tell the difference.